Get fresh music recommendations delivered to your inbox every Friday.
We've updated our Terms of Use. You can review the changes here.

by The Lee McClure Ensemble 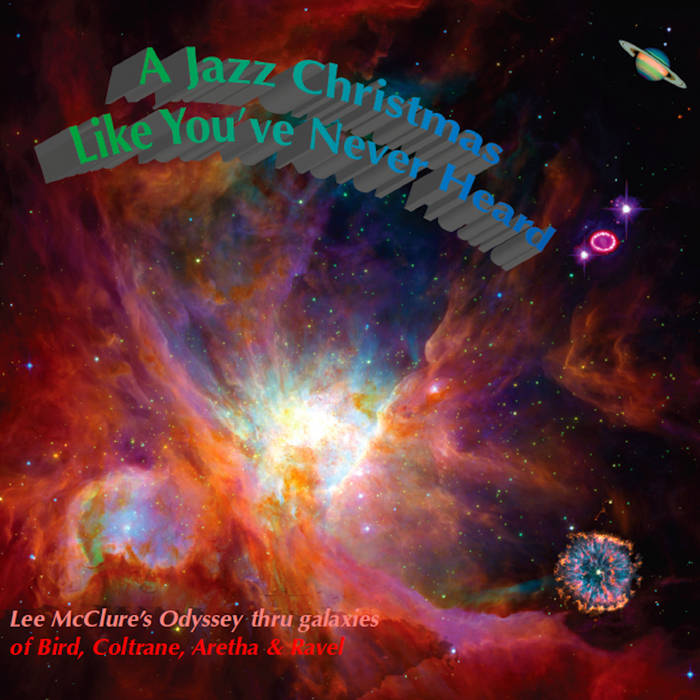 Played on 40 radio stations in the United States, this CD was reviewed by Oscar Groomes in O’s Place Jazz Magazine: "This is not your traditional Holiday album. It is truly a unique approach with the band exploding through classic spirited bebop arrangements with vocalist Margaret Dorn soaring on improvised vocals on top. For sure Lee has managed to transform, twist and provoke our imaginations. The music is great and the lyrics are familiar" (2009).
⧈ ⧈ ⧈
Two examples: “Silent Night” is in a minor key in a Latin rhythm. “We Three Kings” in a McCoy Tyner style arrangement with a chilling breakneck improvisation suggesting just how afar the kings travelled.

LEE McCLURE has a long history of mixing the best of different styles. Premiered at the Cathedral St. John The Divine, his opera "Mother And Child" used all pop singers featuring jazz singer Judi Silvano. About Lee’s “Symphony No.1” Buffalo Philharmonic conductor, JoAnn Falleta wrote: "I found it to be a really beautiful work. I look forward to studying it" (2015). In addition to Jazz and classical works, Lee has composed and performed an extensive repertoire for his self-designed electric flute. See a well categorized list of all his works with links to recordings, videos, scores and parts at: www.eclectixnyc.org/WorksAndPerformances-withLinks.html

Vocalist MARGARET DORN has a wide range of style and emotion on her 3 solo CD's. She has won awards and worked with Celine Dion, Jennifer Lopez, Barry Manilow, & Diana Ross. Her songs have been recorded by Karen Carpenter and Tom Jones. Margaret is the director of The Accidentals, a pop-Jazz a cappella octet (national champions!)

"A sound that cuts through like a sabre slashing velvet curtains, Chris Hunter takes no prisoners" — (Downbeat Magazine). That got saxophonist CHRIS HUNTER into the legendary Gil Evans Monday Night Orchestra. Since then he's been a soloist with Michel Camilo, Tania Maria, Sting, Alex Blake & Flora Purim.

With extensive tours worldwide and performances with Anita O'Day and Buddy Rich, pianist BOB ALBANESE brings a masterful intensity to both his solos and accompaniments. As a leader, Bob's third album "One Way Detour" features saxophonist Ira Sullivan.

Bassist RATZO HARRIS has worked with some of the greatest musicians in Jazz including: Les Paul, Jon Hendricks, Cal Tjader, Bobby Hutcherson, John Handy, Betty Carter, Joe Henderson, Randy Brecker, Denny Zeitlin, and Elliot Sharp. He is a National Endowment for the Arts recipient, contributing columnist for Bass Player magazine, and on air host for radio WFYI in his hometown, Indianapolis.

With a steadiness that you could build a bridge on, drummer TONY MORENO turned up the heat on these arrangements and put fire in his solos. From New York City and Moscow to Istanbul and Azerbaijan, Tony has performed or recorded with Dave Liebman, Richard Bona, Frank Lacy, Sonny Fortune, Ravi Coltrane, and has recorded with Bruce Arnold's Spooky Actions on 3 CDs.

Bandcamp Daily  your guide to the world of Bandcamp